Simple question.  Not so simple answer.

Lt. Dangle of Reno 911! did inspire the Lt. FFIREHS character.  Folks certainly make that connection.  But it’s not the only one tourists and audiences from around the globe make during their not always sober navigation of Hollywood or Las Vegas.

Super Troopers is popular.  (Which one? Never clarified.) So is Doofy from Scary Movie.  As well as the Village People.  For many visiting the United States, the generic “Sexy Sheriff” works.  All recurring favorites.  But just the tip of the … well, you know.

Then there’s the Barbie walkie.  The rainbow tactical leg warmers.  The banana as standard operating firearm.  How is that true to the Reno 911! character?  Tom Lennon himself (the creator of and actor who played Lt. Dangle) did make the distinction that Lt. FFIREHS was “bigger”.

When people first encounter Lt. FFIREHS, they might identify a recognizable character.  Or they offer a statement that’s gotta be made. Or question that must be asked.  Sometimes people don’t realize they just said it out loud.

So here we go.  You’re welcome.  The previous list is here.  Some of the additions since then are below.  There’s a 3rd list somewhere, but Leonard Nimoy is not currently available to go In Search Of …  All will be migrated soon into a new master list (to be updated with new additions going forward). 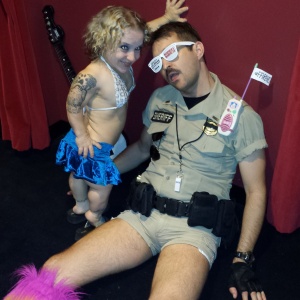 “Definitely a Libra”
Captain Dan
“I know, I seen him!” (Annoyed)
“Idiot!”
“Dango?  Vegas 911?”
Sgt Dinkle
“It’s legal in every state now”
You’re in the wrong city
Need a tail pipe?
Who are you supposed to be?
Tinkerbell
What are you promoting?
“Young man …” 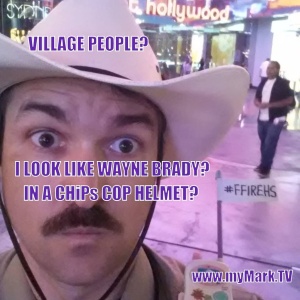 “Take them damn boots off”
Marriage Is Murder?
Fucking clown. Ass clown.
Lord Vegas
Mr Gay Guy
“Ya’ll hiring?”
“Ferris? That’s awesome!”
“Hey, aren’t you supposed to be on Reno 911?!?!”
“Oh, he’s from that show”
“Man, you’re way too serious, bro”
Las Vegas 911
“You don’t like titties, you like penis”
“You look like Boss Hogg (long pause) on the Dukes of Hazzard”
“Where’s your skates?”

“Hey it’s Outback Jack”
“Yes we can!”
“Holy Hannah”
Larry
“Are you a wrestler?”
“Looks like the guy”
“Any tips yet? Didn’t think so”
“There’s your boyfriend”
“What is he, like a rainbow cider?
“Is that Macho Man?”
“Where the fuck is he going?”
“I’d hit that”
“What is that?”
Erasure
“Whyyyyyyyy Em See AAAAA …”
“That show’s been canceled since …”
“Are you a real Sheriff or a fake Sheriff?”
Lt. Durango
9031. (Then to her male friend) “I’m gonna buy you some of those shorts. So we can role play.”